Hello, my apologies for being absent for so long. Doing this blogging thing so consistently is more work than I thought it might be. But here is, for your enjoyment, my next attempt.

Okay…better beginnings. I can’t cover everything that makes up a great beginning or this would be a very long post, indeed. So I’m going to have to break things up and make this a series. Better beginnings part one is going to be revealing character through action.

Storytime. Last October I went to the Surrey International Writer’s Conference in BC, Canada. Awesome, amazing conference, if you can ever go. Anyway they were having a Writer’s Idol kind of thing, where several NY editors were on the panel and Jack Whyte was reading the entries. Now having Jack Whyte read the entries was like having James Earl Jones read them only better. Jack’s voice is deep and has a slight Scottish burr. You get the point. So the editors would listen a bit and then one of the panel would stop Jack when they were at the point they’d reject the manuscript. And in this case they let him read a paragraph or two of most of the entries. Most of their “rejections” I agreed with. Some of the entries had the audience tittering well in advance of being cut off. Let that be a lesson, always have somebody read your work to you aloud.

But this one story, even though it was eventually cut off, held everyone in thrall. The room was silent but for Jack. Everyone leaned forward a little in their seats, and I know more than a few held their breaths because when the editors did call a halt, there was a little collective gasp.

So what had this one author done that was so different? S/He put on page one conflict (but you know that) and character action that clearly said not only who people were but what kind of person they were.

His or her main character had the door burst open and wake her from a sound sleep; her sleeping child started to cry. She reached into the crib and picked up her daughter. A large frame filled the door, the glint of torchlight blinded her. She was pulled from the house and it was set to flame.

The hulking man wrested her wailing daughter from her arms and swung the infant by a leg and bashed her tiny head against the tree. The child cried no more. The woman was bound to the tree and raped. (1, 3, 5)

Now look at all the demonstrating action in this, especially what it says about the hulking man. You know EXACTLY what kind of person this is, don’t you? You have an impression. You are emotionally involved.

Yet no one has said ‘Oh Vaylok is a psychopath.’ Or worried internally. I hope Vaylok doesn’t show up he’s a crazy person. I heard he killed Lucia’s baby and raped her. I hope he doesn’t come here.

I also want to point out why all the editors on the panel said they would take a pass on this story. They said it was too violent for an opening. They said you could work up to that kind of brutality but on page one it was too much. But they all agreed the story was engaging and well written.

Now this is an extreme example and I’m NOT saying all stories need to start out with violence to be captivating. What I am saying is, whatever action is on the stage at the opening needs to say something about the characters, about their character and their intrinsic nature.

Michael Hauge says that you using 2 of the 5 tools for establishing rapport between your MC and your audience is the most effective.

Okay on to the examples: Movies in use this month The Chronicles of Riddick, Ladyhawke 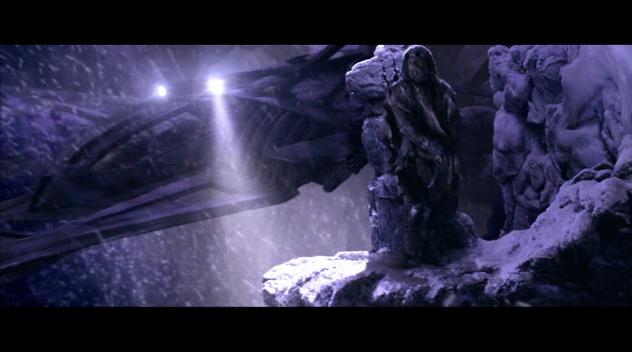 There is a little prologue that establishes the conflict and the villain. He (the Lord Marshall) destroys a planet.

Cut to a man in rags covered in snow, running. It’s snowing and it’s cold. He has long matted hair and an ice-encrusted beard. He is leaping across what looks like a stone labyrinth. Then comes a small spacecraft pursuing him. Projectile nets fly through the air. Several times he shifts direction at the last moment and escapes capture. The third time just as the runner has made it to a cave, one of the pointed bolts pierces his calf. He pulls it out. Stands in front of the ship and nods toward the canyon/cave, as if daring his pursuers to follow. (5) He’s in jeopardy and he’s the underdog. One against many and more rudimentary equipment at his disposal.

He is armed only with two knives which he uses to help him climb. One by one he picks off his pursuer until only the pilot/leader is left. (2) He can take care of himself; he’s skilled at survival.

Here we have Phillipe Gaston, the Mouse, escaping from the dungeons of Acquilla. Dirt falls out of a small hole then an arm and a head appear. “Not unlike escaping mother’s womb,” he observes. “God, what a memeory.” (4) He’s comical.

Interspersed are scenes of men being hanged, and a request to bring on the next batch. And a personal request for him. (5) He’s in jeopardy.

He does wiggle out and escape something no one has ever done before. (2) He’s a skilled escape artist and thief.